A trip to Tanzania, where there is much less of the “stuff” most of us are used to being surrounded by, made Recycleopedia.com journalist Lucy Purdy rethink the value of the resource we know as ‘rubbish’.

What lessons are to be learned from a country where every plastic bottle and every old car tyre is not junk to throw away but an opportunity for reuse? 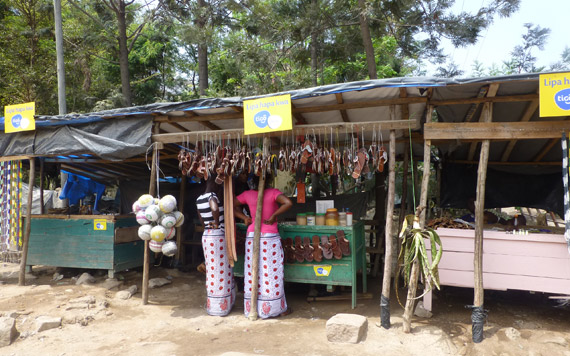 On one side of the dusty mud road in Mwanza, Tanzania, a boy pushes a truck made from an old crate. Ingeniously conceived from bits of wood and plastic it is the envy of the other children he passes on his way home and clearly much-cherished. On the opposite side of the street in the city’s Masai market stands a stall selling footballs. But these are no gleaming, mass-produced Nike or Adidas products. The footballs cost 1,500 Tanzanian shillings (about 58p) come in beautiful faded shades of green, blue, yellow and pinks, and closer inspection reveals them to be made from old packing strips, bound around a centre of folded plastic bags in a complex system of knots and binder twine loops.

Admittedly, they are not all perfectly round and don’t offer much of a bounce, but they are more than good enough for a kickabout; visible against a worn pitch, robust and satisfyingly weighty to boot.

Crucially, they exist in Tanzania – and similar ones all over Africa – because products by the likes of Nike and Adidas are simply not available here. Even if they were, they would be starkly unaffordable to many adults let alone the kids hankering after a game once school’s out. As is the case with many of the sights I see here, the footballs represent resourcefulness in the face of scarcity and are a reminder of humankind’s boundless capacity to problem-solve as well as just how much many of us take for granted. 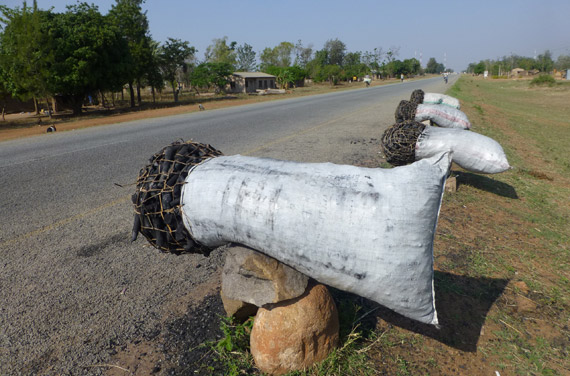 Bags of collected material await collection at the roadside

In an era when practically all products and services are available to buy or commission at the click of a mouse in the Western world, Africa provides an inspirational antidote. A counterpoint to our often indolent reliance on corporations and industry. From a landscape dotted with houses made from sun-baked mud bricks to bicycles fitted with ever-impressively bodged baskets for bananas, chickens, charcoal or whatever else needs to be transported: the continent is a constant reminder of just how much is available to us in the UK.

While households across England and Wales have cupboards groaning with plastic bags we have no use for and eventually throw out, in Tanzania, these are carefully collected, cleaned and stored. For street children who may have no income, possessions or family, they can scrape together enough money for dinner by selling bags to shoppers at the bustling vegetable market. Paltry reward yes, but it may mean the difference between survival and not.

Plastic bottles which may be discarded without a second thought in streets and suburbs across England are gathered together in Tanzania, washed and filled again with kerosene to be sold by the side of the road or as floats by fishermen on Lake Victoria. Worn car tyres are cut to shape to form sandals, and racks of these too line stalls across Tanzania. Some are decorated with beads and some left unadorned, but both are equally practical defences against the scorching sand, snakes, spiders and whatever else happens to lurk underfoot. I bought some honey, rich and delicious, from a Masai stallholder who had collected it from wild bees in the countryside on the edge of town. It wasn’t packaged into a sterilised glass bottle and branded to within an inch of its life as would be the case in a UK supermarket but decanted into a bottle which had previously contained the Tanzanian liquor Konyagi. And it was all the more interesting and tasty for it. 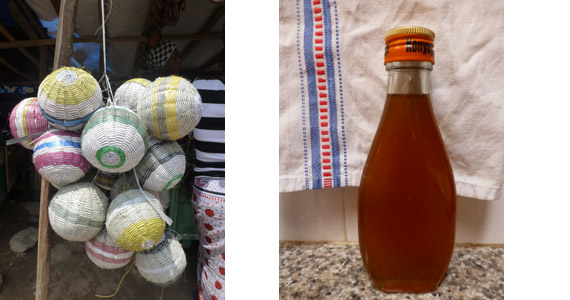 But of course, though it piques my romantic, post Tesco-domination, Western desire for food provenance, neither this nor many of the other uses stem from anything other than necessity. The fishermen who make boats from polystyrene packaging bound with bamboo covers do so because it’s all they have access to - literally a case of whatever floats your boat if you will – and the young boy wearing the baggy, hand-me-down suit jacket to church on Sunday struts in it proudly because he has his friend has none and anyway, it is that or nothing.

In a week where the UK newspapers have been full of indignant headlines on how much packaged salad Tesco throws away, pretty much every single food scrap in Tanzania (and there aren’t many to begin with) is given to chickens, pigs, ducks or dogs. Waste not want not is still overwhelmingly applicable here where many do not have enough to eat.

Even in peaceful Tanzania, the continent’s challenging history is much in evidence. Another market in Mwanza sells old canvas United Nations aid truck covers. People buy them to use as covers for their trucks or even roofs for their houses, and why not? The fabric is tough and has years of use left in it. Old cement bags are used for the same purpose. It is perhaps a blunt comparison, but how many of us still baulk at the thought of buying second hand clothes? 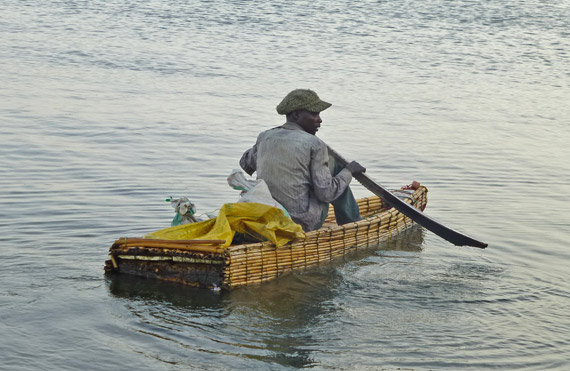 We’re eager to complain about the NHS and all its perceived failings, but in Tanzania, where wheelchairs are made from worn out, modified plastic garden chairs, many people have never set foot inside a doctor’s surgery or hospital.

Not every innovative reuse comes down to necessity though. Beautiful beads are made from the fiddly rolling of brightly coloured glossy magazine pages and glass beads are restrung too and worn to beautiful effect by Tanzanian women who are already immaculately dressed in their striking kanga and kitenge fabrics. In the doorway of a children’s HIV hospital on the outskirts of Mwanza, old wire has been sculpted into the shape of butterflies, and at an exclusive lakeside cafe, where the price of a cola and chicken lunch is beyond the reach of most ordinary Tanzanians, a beautiful feature drinks bar is made from the faded paintwork of a no longer lake-worthy boat. A design choice as well as a cost-saving perhaps in this instance.

Though it’s a phrase oft-uttered by the irritating, newly-returned traveller, to “be lucky with what you have” has never been far from my mind since I walked off the plane at Heathrow, leaving behind on my comfortable seat, of course, the travel pillow, toothbrush and toothpaste set, flight socks, disposable headphones, earplugs, individually packaged multi-item dinner and breakfast and several in-flight magazines.

Africa will stay close to my heart for many reasons, but one clear lesson my six weeks taught me is that people have an inherent capacity to problem solve and to get by with what is available, however little or however far away from what we want it may be.

Our skills of self-reliance, practical-thinking and capability are perhaps not put to the test all that often here in the UK and in countries where many people enjoy a similarly high standard of living. But in Africa they are examined on a daily basis, and in circumstances when poverty, malnutrition, disease and death often hover frighteningly close by. It is a reality that most people reading this will never see, and even fewer experience, but perhaps we could all aim to take from knowing that it exists, the importance of valuing what we have. 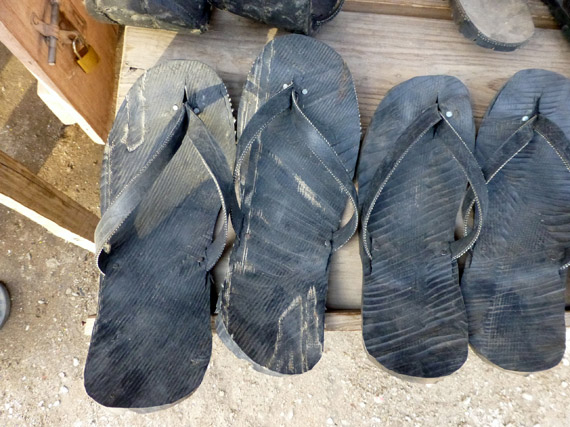 Simple and effective, flip flops made from old car tyres

I know that if I call to mind the young boy pushing an old bike tyre down the track with a stick the next time I stroll through Toys R Us, or visualise the village woman weaving a plastic bag out of packaging strips the next time I rip open a new TV or microwave, I will stop for a moment to appreciate the things I’m lucky enough to have. I may not have paused before.

Arguably, in a world of ever-straitened resources, the cosseted Western existence that we know now will creep ever closer to the lives lived by people in places like Tanzania. And who will be better equipped to face the consequences of what we’ve done to our planet then? For all our money, boundless opportunity and privilege, it certainly won’t be us.