A flood of kindness

A volunteer army is being assembled to tackle storm debris on UK beaches, just one of the measures to sort and recycle the rubbish left in the wake of recent bad weather.

Some of the volunteer army of beach litter pickers.

The target is to clear litter and debris equivalent to the weight of a double decker bus and a bit more – more than 15 tonnes of litter. It is hoped around 8,000 people will get involved at 113 beaches and 50 canal-side locations in the initiative organised by Marks & Spencer, the Marine Conservation Society (MCS) and the Canal & River Trust (CRT). This year’s Big Beach Clean Up will take place between April 22-28.

According to the MCS there are two pieces of litter on every metre of our coastline, most of it plastic. The harmful impacts of plastic on the UK's marine life are becoming ever more apparent and the MCS is concerned that plastic pieces are being discovered lurking in the digestive systems of fish including Whiting, John Dory and Gurnard.

Most of the litter collected will be common items such as fishing nets, ropes and bottles tops. However last year M&S beach cleaners found an array of unusual items including a set of false teeth and half a sofa in Edinburgh, a cabinet near Liverpool, a ten-pin bowling ball in Deal, a carpet in Clacton and a pink thong on Shoreham beach. 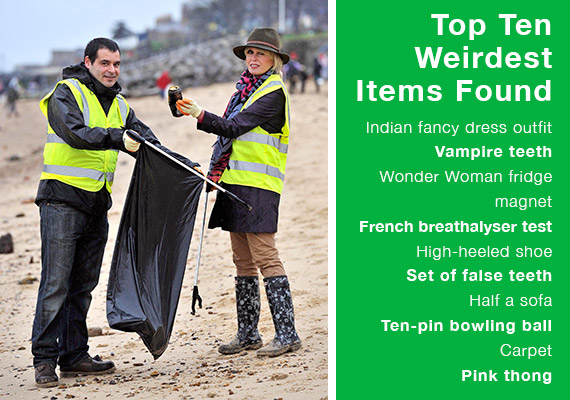 The cleans will take place at beaches in the UK and Ireland - including Swansea, Blackpool, Southend, Aberdeen, Coleraine, Dublin and Portsmouth - and 50 canal locations (these clean-ups are open to M&S employees only) - including the Grand Union Canal in London, the Leeds & Liverpool Canal in Leeds and the Birmingham & Fazley Canal in Birmingham. 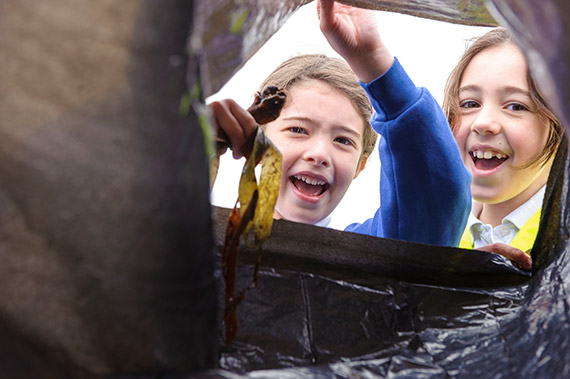 Children and adults alike are all helping with the Big Beach Clean up.

Sacha Berendji, director of retail at Marks & Spencer, said: “Our Big Beach Clean-up is a great way for customers and M&S colleagues to volunteer, help their local community and protect our precious marine life. It's a great fun, outdoor activity that is rewarding in more ways than one. Beach cleaners are helping the environment, their community and those that register in advance get a £5 money-off voucher.”

Samantha Fanshawe, MCS chief executive, said: “Support for beach cleans last year really helped us to turn a corner in the fight against beach litter. It is fantastic to have M&S’ support again this year and we're hoping for a massive turn-out from the public to make this the biggest event ever and to remove even more litter from our precious marine environment.”

And Simon Salem, marketing director at the CRT, added: “The canal network is a national treasure and a haven for many endangered and much loved species. By supporting the new Trust and our waterways, the M&S Big Beach Clean-up recognises the value of the waterways for fish and other wildlife.”

Meanwhile around the country, clear-up operations have been taking place to tackle the flooding’s aftermath. More than 500 people from across the country have volunteered online to help remove 100,000 sandbags, rotting furniture and other rubbish. Moorland in Somerset, where 50,000 sandbags were distributed when the rains hit, became one of the first areas to have access cleared to its roads and houses. 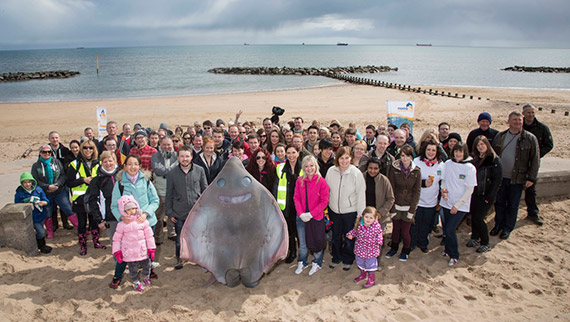 Waste firm Viridor installed makeshift transfer stations in Somerset with skips and containers to take away debris from nearby homes. Ten days into the clean-up operation, 22 skips and containers had already been put into the stations and approximately 30 tonnes of waste removed.  But the nature of flooding makes recycling difficult. Viridor said that most of the waste will go to landfill due to water contamination, although the WEEE and metals will be recycled.

Mike Griffin, Viridor’s operations manager, said; “Whilst the volunteers are undoubtedly the heroes of the clear up operation, we are pleased to be able to help. Some of these houses have been under water for 5-weeks, so very little is salvageable and because it’s on such a big scale it’s likely to go on for some weeks yet.”

Stuart Smith, a volunteer from Wellington who has been helping from 8am to 8pm every day for five weeks, added: “I came down to help one weekend, and I’m still here. The help has changed over that time, but we are now focusing on the clear-up operation. The systems for filling the skips and segregating the waste and recycling are operating well and the families are so grateful for the help we are giving them.”

Visit www.mcsuk.org/foreverfish to find out more about the Big Beach Clean-up.

(February 2014) The modern age has been described as a ‘story of stuff’. A treadmill of frenzied acquisition in which the buzz we get from buying never quite satisfies, urging us onwards still in a depressing narrative of accumulation. For many of us, this is particularly evident in our wardrobes: the stuff we buy ostensibly to keep us covered and warm, but which in reality is about so much more.

(January 2014) When mum-of-two Anna Pitt found herself being asked for the recycling tips she practiced with her family, she decided to gather together her snippets of recycling and eco living advice and realise a lifelong ambition of writing a book.