When mum-of-two Anna Pitt found herself being asked for the recycling tips she practiced with her family, she decided to gather together her snippets of recycling and eco living advice and realise a lifelong ambition of writing a book.

101 Ways To Live Cleaner and Greener For Free was the result: a cheerful tome which takes the guilt and confusion out of taking the green option. And putting pen to paper took Anna on a journey of discovery herself, as journalist Lucy Purdy finds out. 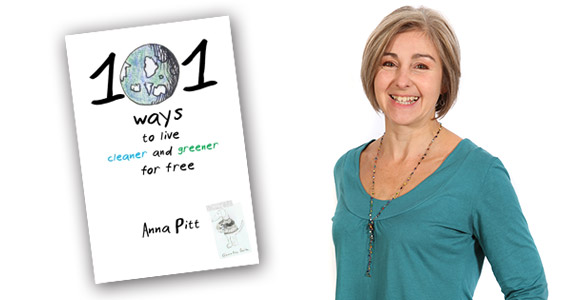 “I think there is some inbuilt instinct in us that makes us want to care for the environment,” Anna explains, as she pauses at home in west Oxfordshire during a break in research for her second book.

“Even people who don’t consider themselves to be ‘green’ discover that they feel very strongly about recycling for example once they start doing it. I think the instinct is sometimes just a bit deep down and needs to be brought to the surface.”

This is where her book comes in: packed with tips and advice, from how to cut food waste, save water, energy and fuel to how you can reuse your ‘stuff’ in creative ways, it also gives the science and maths behind the advice to help you realise they are worthwhile.

“They say anyone can write a book, and I’ve always wanted to, I just didn’t know what mine should be for a while,” laughs Anna.

“I’ve always taught my children to take care of the environment, not to litter, to see things as resources and not as rubbish. We ended up not really needing a bin. People used to ask me how we did it, and I thought, maybe this is the book I should be writing.”

Anna set up a website to gather other people’s ideas, writing about the project in her blog, before taking the self-publishing route to getting the book printed.

Now she runs The Dustbin Diet waste reduction workshops for schools and community groups and is working hard on a second book, in a similar format with cartoons and a refreshingly simple layout, on food waste reduction. She hopes this will be finished by April and invites contributions from anyone with a tip at the end of their tongue.

Anna’s experience of introducing her children, 19-year-old Lizzi and 17-year-old Jen, to concepts of recycling and anti-consumerism when they were younger encouraged her to write 101 Ways in a non-judgmental, accessible way.

“I think it’s important to take out that element of guilt – to make recycling and reusing fun,” she explains.

“Setting targets works really well, as does being creative about it. Maybe you can have a carrier bag destined for the charity shop and challenge yourself to fill it every week. My advice for those who don’t know where to start would be to do one thing. Pick something that you don’t already do and make it easy and simple. So if you don’t recycle your cereal packets, go and concentrate on that. I think it’s like taking the first step on an escalator: once you start you can’t stop.”

When her daughters were younger, Anna got them interested in collecting smaller things such as buttons, belt buckles, old watches. “They can create a lot of money for charity shops and have a lot of use in terms of upcycling, in craft and art,” she explains.

“A lot of people don’t realise that you can take trousers which are covered in paint or bleach to a lot of charity shops and they can get money for the rags. A jacket which has one damaged sleeve for example can be made into a beautiful new garment with sleeves made from something else.”

And what is Anna’s advice to those who read media headlines on climate change and diminishing resources and fear that their small, domestic level attempts are pointless? “People have said to me, ‘but these tips won’t change anything’. My response is that maybe they aren’t going to solve climate change on their own, but I think it’s important to do something.

“People can’t cope with the idea that we have got to stop climate change. It is too much. How? But they may be able to incorporate small changes into their lives which could make a difference collectively in the long-run.” 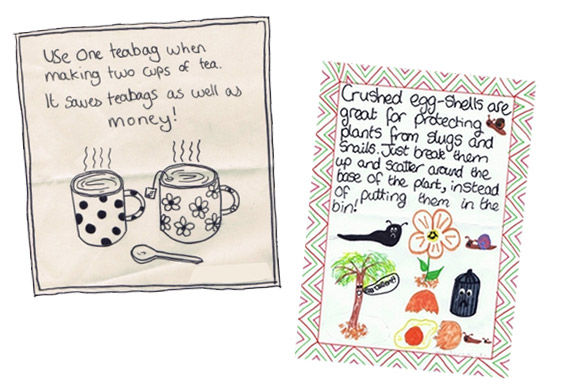 She has found the process of putting the book together and the workshops that have followed, immensely satisfying.

“A 14-year-old boy at one of the schools told me that he is now the person with responsibility for recycling in his household, because he knows how to do it. And he told me that with such a sense of pride,” she says.

“It has made me think differently about a lot of things too. For example, I decided last year not to buy any new clothes. It was fantastic. I loved it!"

“I spent just £88 on clothes in a year and have been more creative and daring than ever before. I don’t think I could really go back to the high street now. I found a designer skirt that would have cost well over £100 new on its own for example, and love the treasure hunt feel of searching through charity shops.”

Anna says the challenge prompted her to embrace her “inner hippy” and have fun with what she wears, and recommends it to anyone with bulging wardrobes or drawers creaking under the weight of items bought in a heady retail buzz but never worn.

“I don’t panic and think: “I need to go to the shops to buy something to wear on Saturday,” I think about what I already have and how I can wear it differently. I went to a posh party before Christmas and wore a skirt I had worn 20 years ago. It was black lace, the kind of style that I keep seeing in shop windows at the moment, which was languishing at the back of my wardrobe but which I’d loved enough not to throw away. Now I like swishing and buying second-hand and wearing clothes which tell a bit of a story.”

From small steps to shifting thought processes and change strengthened by the power of collective action, Anna hopes her work will make a difference in its own way.

Whether it’s a pile of unwanted Christmas presents which could be destined for your local charity shop, a resolution to turn the radiators down a notch to save energy or a decision to scour the internet for tasty leftover recipes, you could begin to do the same.

There are (at least) 101 ways to live greener: so why not begin today? Pick one!

(October 2013) A trip to Tanzania, where there is much less of the “stuff” most of us are used to being surrounded by, made Recycleopedia.com journalist Lucy Purdy rethink the value of the resource we know as ‘rubbish’.