Heart On Your Sleeve

The modern age has been described as a ‘story of stuff’. A treadmill of frenzied acquisition in which the buzz we get from buying never quite satisfies, urging us onwards still in a depressing narrative of accumulation. For many of us, this is particularly evident in our wardrobes: the stuff we buy ostensibly to keep us covered and warm, but which in reality is about so much more.

With this in mind, clothes recycling charity Traid is challenging shoppers to source at least half of the clothes they buy in 2014 from charity rather than new. So, are you a sucker for high street catwalk copies or open to the allure of hunting for charity shop treasure. Could you do it? 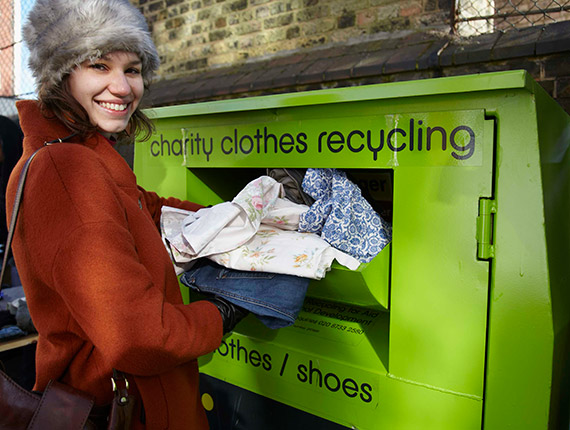 The start of the process is the people recycling their unwanted clothes. Picture: Traid

With around one million tonnes of textiles being sent to UK landfill and incineration each year, much of which could be worn again, Traid’s work to find positive reuses for clothes waste is perhaps more relevant than ever. Their charity wardrobe challenge is just the latest part of a 15-year history of funding projects around the world which create an alternative to fast fashion. After all, the underlying reality of cheap and cheerful fashion is that it’s not at all cheerful. Someone is likely to be losing out along the way: usually a factory worker on a poor wage, working in sub-optimal conditions, and this is before you even take environmental considerations into account. Whether we admit it or not, we all probably realise that the cost of those cut-price jeans is much more than the number on the tag.

Around one million tonnes of textiles are being sent to UK landfill and incineration each year.

Traid takes practical action, with a circular and sustainable approach to the multi-faceted problem of clothes waste, tackling disposal, production and consumption: from collecting clothes donations, running its shops and the TRAIDremade fashion label, educating people about the impacts of textiles on the environment to funding international projects. In the past, these have ranged from tackling pesticide dependency in cotton production to negotiating maternity rights for works in Lesotho.

Each day, six or seven vans loaded with unwanted clothes and textiles drive through the doors of the Traid warehouse in Wembley. About seven tonnes of stuff is loaded on to the conveyor belt behind which Traid’s sorting staff stand, poised to sort through the textiles with a dexterity and sharpness of eye honed from years of experience. 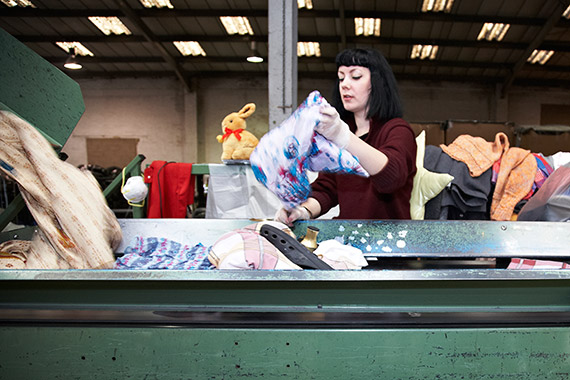 Tonnes of items are collected every week to be sorted by Traid. PIC: Traid

"Last week we had a herringbone Superdry jacket still with the £250 tag on."

“Premium is designer or vintage clothes, pieces that are really on-trend. Last week we had a herringbone Superdry jacket still with the £250 tag on. The high street trolley is for clothes by shops like Topshop, Zara, H&M and into the ‘basic’ one goes clothes from places like Primark and the supermarket brands. Then we have trolleys for children’s clothes, saris and African fabrics, and then linen for things like curtains and bed sheets.”

All but damaged clothes, those which are stained or ridden with holes, are saved and great care is taken to reunite estranged shoes. “I would urge people to tie the laces together when they donate,” says Claire. “It would make things so much easier!”

Among the items rolling on to the belt as I watch is a banana costume, a Spiderman mask and a pair of (thankfully new) Where’s Wally? pants – an eclectic assortment explained by the relative recentness of Christmas, Claire suggests.

A cosy looking Aztec rug is next to hit the belt – it wouldn’t look amiss in a glossy interior decor magazine – before a beautifully crafted brown leather bag slides past: “that will be great for Dalston,” muses Claire, plucking it from amongst the Next shirts and Primark tops. 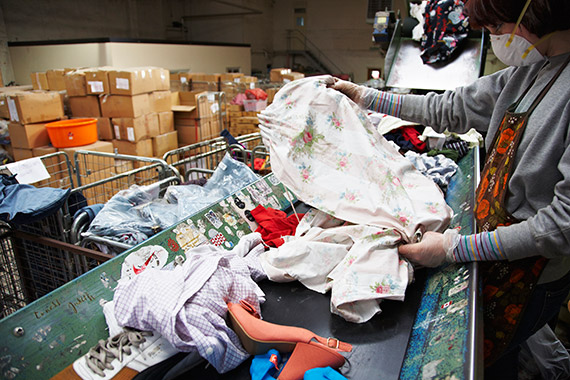 Items are sorted by hand on a conveyer belt. PIC: Traid

The time and care taken at this stage of the collection-to-shop process is critical: Traid’s USP in comparison to other charity shops is that their stock is hand-sorted. This means the clothes that line the shelves of their 11 shops in and around London (in locations including Camden, Clapham, Shepherd’s Bush and Wood Green) are deemed most suitable for the budgets and tastes of that area.

It also allows Traid’s shop managers to be more selective, to match the clothes to the seasons as well as pick up on any trends in the fashion press. Indeed, Claire puts together a kind of mood board for each season which hangs in the warehouse entrance and offers the sorters tips on what to look out for. Of course, the more effectively the donations are sorted, the more the value of each piece of textile is maximised, to make as much money as possible for Traid-funded projects and to prevent waste going into landfill. Every shop has four seasonal sales and restocks each year: there are no ancient piles of pastel-hued t-shirts collecting dust here.

As Claire, who used to work for a high street clothing label, explains, the Traid model is set up to answer a need thrown up in part by the wasteful nature of the fashion industry. But, more than this, it’s our relationship to clothes in general, a story of overconsumption on a finite planet. In short, it does not add up. Or, as society is increasingly realising, make us happy.

WRAP’s 2012 report Valuing Our Clothes said that UK consumers have around £30 billion worth of clothes which they haven’t worn for a year hanging in their wardrobes.

Liz Goodwin, CEO of WRAP, said: “The way we make and use clothes consumes a huge amount of the earth’s precious resources, and accounts for a major chunk of family spending. But by increasing the active use of clothing by an extra nine months we could reduce the water, carbon and waste impacts by up to 20-30 per cent each and save £5 billion.”

In 2010, the UK threw out an estimated £238 million worth of textiles for waste collection and sent to landfill, all of which could have been re-used, recycled or sent for energy recovery. 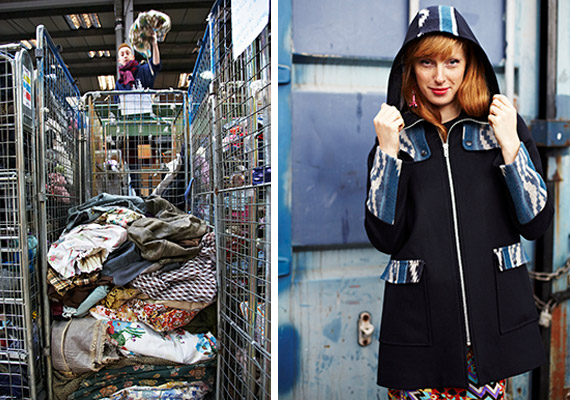 “Quite a few years ago, if you didn’t have much money, you didn’t have many clothes,” says Claire. “Now people feel it is their right to have clothes and to be fashionable, no matter what their budget. Shops such as Primark are fuelling that. We have become accustomed to fast fashion: seeing it on the catwalks and then in shops just weeks later.”

Fabric orders are placed by time-pressured designers, she explains, for collections which may then be cancelled or scaled back. But by then it is too late, the material is already printed and woven, a scrambling, competitive mass for sales which leaves of fabric for which there is no use. Sometimes it can be kept back for future collections, but distinctive prints or seasonal specials often make this a no-no in an industry which prides itself on ‘reinvention’. Traid often benefits from these situations through the form of fabric donations, but of course ideally, Claire says, the waste would not arise in the first place.

Some of the charity’s most interesting work is for TRAIDremade: Traid’s in-house fashion label. Unwanted textiles including vintage and end rolls are used to create the garments which are dreamt up by designer Clare in a studio underneath the Dalston shop. The pieces are then sold in the Dalston and Camden stores as well as online. Between six and eight styles are designed each season and between 20-50 of each made. Patchwork jumpers are selling well at the moment, Claire tells me, as are dapper coats made from donated, top-quality Italian wool. In the summer, simple sun dresses fly off the rails. 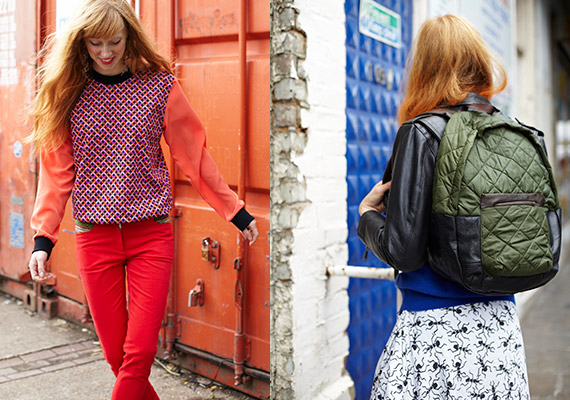 Some of the great quality items that Traid receives and re-sells. PIC: Traid

This is a more satisfying way of buying clothes, it seems: a relationship which is more responsible and considered, and which has to do more to do with thought and creativity than pure acquisition.

“Shopping at Traid is great because you can buy good quality clothing at an affordable price. It will last longer, it is good quality but it is in your budget,” Claire says.

So are you persuaded to take the Traid wardrobe challenge yet? Feeling tempted to renegotiate your relationship with the high street? Look in your wardrobe to see what you have. Repair what you have that needs repairing and organise some things you no longer use for donation.

Donations helped Traid commit nearly half a million pounds in 2013 toward their projects around the world, all from unwanted clothes. After all, whether it’s curtains, clothes, shoes, belts or bags, more donations Traid has, the more it can do.

(January 2014) When mum-of-two Anna Pitt found herself being asked for the recycling tips she practiced with her family, she decided to gather together her snippets of recycling and eco living advice and realise a lifelong ambition of writing a book.