Even if we are trying to live less materialistic and consumerist lifestyles, few people are immune to feeling a rush of warmth and excitement when they see a brightly wrapped Christmas present.

Whether it’s a gift clad in snowmen, Father Christmases or even brown paper and a simple ribbon, the packaging implores us to ask the question: “What’s inside?” 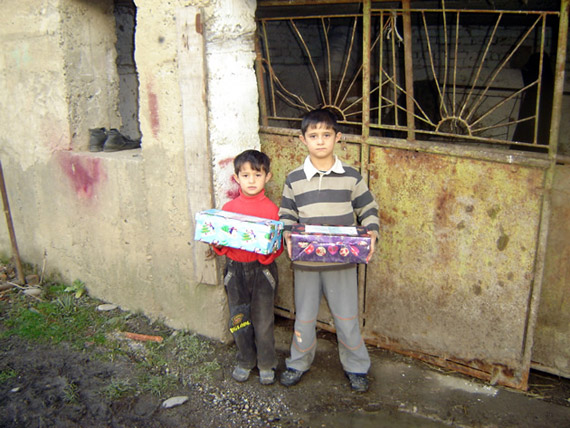 This is the fundamental concept behind a shoe box appeal. For years now, charities such as Blythswood and Operation Christmas Child have been gathering and distributing recycled shoe boxes filled with gifts to children at Christmas. For Blythswood, whose headquarters are in Scotland, this year represents their 20th anniversary of running the appeal. Already more than 1.6 million shoe boxes have been donated and distributed in this time.

As their appeal for donations reads: “It’s not difficult to choose gifts for someone who has so little. Things we take for granted can often be luxuries for people living in desperate poverty.”

People can take part by filling a box as individuals, as part of a religious group, school or other organisation. The boxes are collected and then sent to Albania, Bulgaria, Hungary, Kosovo, Moldova, Pakistan, Romania, Serbia and the Ukraine.

Donors are asked to collect several ‘essential’ items including toothbrush and toothpaste, hat, scarf or gloves and a toy, and then to fill the box up with things such as stationery, sweets, clothing, sewing equipment or toiletries.

Last year, seven-year-old Misi and six-year-old Tomi were among the recipients of a Blythswood box. They live as part of a large extended family with several generations living and sleeping within the walls of one small house. Those at Blythswood discovered that Misi’s favourite activity was painting and that he was therefore really excited to find some coloured chalks in his shoebox. Some older members of the family appreciated the woolly hats that had been donated, with temperatures in their Hungarian village plummeting as low as -29 degrees centigrade.

So, whether you have an empty box from those sparkly high heels from last Christmas, or perhaps you pick up some snug new boots in the January sales, why not explore the idea of recycling in a new way and contribute to one of these schemes in the future.

It brings a new meaning to the phrase “sole mates”.

(October 2013) A trip to Tanzania, where there is much less of the “stuff” most of us are used to being surrounded by, made Recycleopedia.com journalist Lucy Purdy rethink the value of the resource we know as ‘rubbish’.

(September 2013) Thriftiness may not have the most glamorous of reputations, but a new festival taking place this week promises to find the fun in sustainable living by encouraging reuse and recycling.