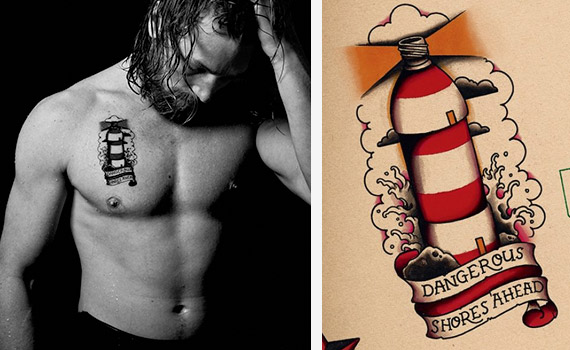 Surfer Ben Skinner, European Longboard Champion models one of the tattoo designs for the Save Our Seas campaign. Image: Greg Martin/SAS/M&CSaatchi

Surfers Against Sewage launch Save Our Seas marine litter tattoo campaign to highlight the growing scale and permanence of the marine litter crisis.

Taking inspiration from stylised maritime tattoos, the Save Our Seas marine litter tattoo references those who are deeply to the oceans: mariners, sailors, fishermen, seafarers, explorers as well as surfers and those seeking thrills and adventure connected to the coastline.

The amount of litter recorded on UK beaches in 2014 was at its highest level ever with 2,457 pieces found for every kilometre of coastline surveyed, representing a six per cent increase on 2013 levels. As well as detracting from the aesthetic and intrinsic value of beautiful oceans and beaches, marine litter threatens ecosystems and kills and damages marine wildlife across the globe. Much of what is washed up can be recycled.

The Save Our Seas campaign highlights what campaigners call “some of the most pervasive litter items washing up on our beaches”, including single-use plastic bags, plastic water bottles, aluminium cans and discarded fishing equipment.

“These now ubiquitous items have become the new scourge of the high seas,” they say. 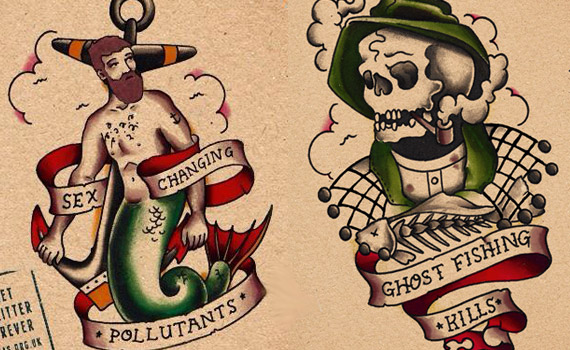 Some more of the tattoo designs highlighting oceanic polution based on traditional maritime versions. Image: SAS/M&CSaatchi

The campaign has received strong support from some of the UK’s best surfers including eleven times European Longboard Champion Ben Skinner and pro surfer Corinne Evans, who have both been ‘inked’ in the name of the environment.

Skinner said: “Our surf spots are amazing natural resources and it’s vital that they are protected from all types of pollution including the tide of litter washing up on our beaches.”

Hugo Tagholm, SAS chief executive, added: “Is marine litter getting under your skin? Surfers Against Sewage’s ‘Save Our Seas’ Marine Litter Tattoos campaign aims to shine a spotlight on the marine litter crisis and create a rallying call to the nation to take more action to protect our waves, oceans, wildlife and beaches from marine litter.”

Donated flowers recycled into bouquets for those in need