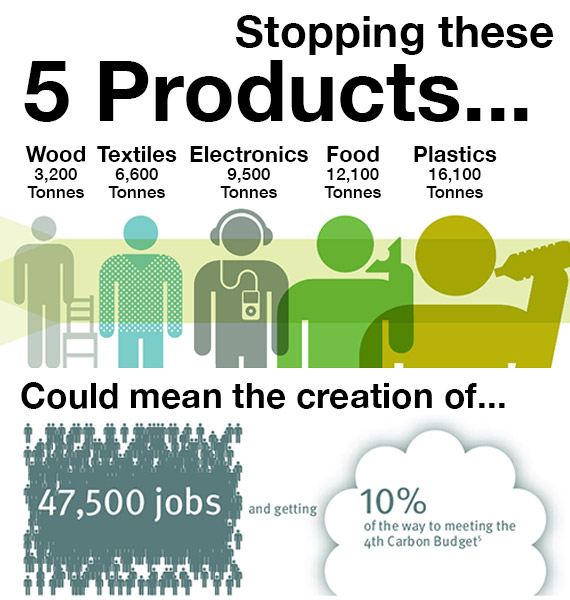 The More Jobs, Less Carbon report by environmental think tank the Green Alliance finds that landfill bans for five key materials could spark the creation of thousands of new jobs in manufacturing and recycling in the UK

Keeping wood, textiles, WEEE, food and plastic waste out of landfill would lead to better collection systems and new reprocessing infrastructure in the UK, says the organisation.

The report says that keeping these materials out of landfill and sending them instead for recycling, remanufacturing and reuse could save £3.8 billion of valuable products and materials from being lost to the UK economy as well as the creation of 47,500 jobs. It would also, they say, cut 14.1 million tonnes of CO2 equivalent per year – equal to emissions from 2.7 million homes – and keep 19 million tonnes of waste out of landfill each year, equal to the weight of 65 full oil supertankers.

Dustin Benton, head of resources at the Green Alliance, wrote: “The UK puts at least £3.8 billion of resources in landfill each year. Keeping these resources out of landfill would support skilled jobs and cut the UK’s carbon emissions.

“Selling the products created through reuse, remanufacturing and recycling generates profit, justifying the labour required to process them. In contrast, landfill just has a labour cost. Landfill is easy, but it makes no sense economically.

“Landfill bans help stimulate better collection systems and economies of scale, underpinning infrastructure investment. Scotland, Austria, Germany, Sweden, the Netherlands and several US states have already introduced them. It is time the UK did too.”