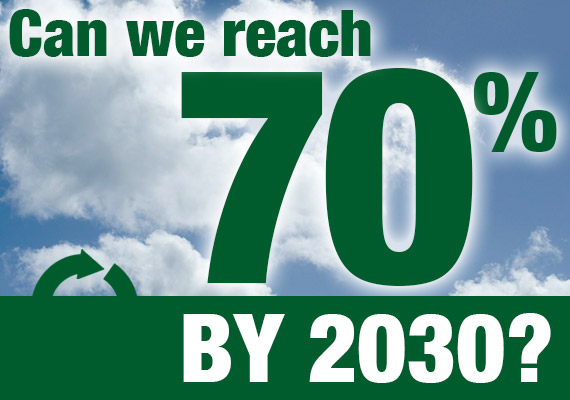 Households are going to be tasked to recycle 70 per cent of all rubbish by 2030, according to leaked report.

People will be forced to recycle almost three-quarters of their rubbish, under European Commission plans for a tough new target, according to the Telegraph.

The newspaper says it has obtained a draft European Commission report showing that Brussels is planning to propose a legally-binding target for 70 per cent of all household waste by 2030. The target currently in our sights is for 50 per cent by 2020, but the UK government has already admitted it may miss this, after English recycling rates stagnated last year, amid claims of “green fatigue”.

The proposal may mean households having to separate their waste into more bins, while councils could face extra costs to fund separate weekly collections.

According to the Telegraph, the draft proposals show that Brussels is also planning to impose a complete ban on any kind of recyclable waste being sent to landfill by 2025. This is set to include plastic, metals, glass, paper, cardboard and biodegradable food waste.

David Palmer-Jones, chief executive of recycling firm SITA UK, said it was “inconceivable” that the UK government would back the plan at a time of such straightened public service resources.

“The EU wants rightly to move us from a throw-away to a re-use based society - but we are still in the UK a long way from getting close to that ideal,” he said. “We are likely to miss the initial 50pc recycling rate set for 2020. Upping the target by effectively nearly half again in another ten years’ time is simply not pragmatic right now without an understanding of the as-yet-unquantifiable cost implication.”

In a Digital Flutter