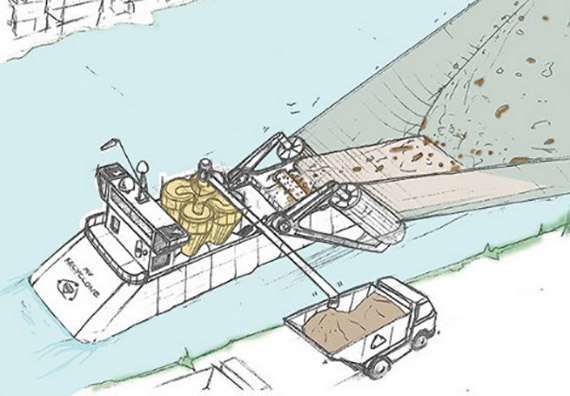 The famed designer has devised a potential solution to clean water: a barge decked out with the same cyclone technology as on his vacuum cleaners.

The recycling barge, which James Dyson designed and launched in TIME magazine last month, features large nets which trap plastic floating on the surface of rivers. A suction system then draws in the waste, separates it and prepares it to be sent for processing. He believes the design could prevent pollution from reaching the world’s oceans, which are already clogged with dangerous particles of plastic.

“The concept I propose,” Dyson wrote, “the M.V. Recyclone, would combat this ever growing problem of plastic waste making its way to our oceans by filtering out debris from the rubbish-stricken rivers that feed into them.

“By focusing on the polluted rivers, the M.V. Recyclone could tackle a concentrated stream of plastic, catching it before it spreads.”

Plastic that pollutes our waterways and oceans is already having a severe impact on the environment. Seabirds, whales, sea turtles and other marine life ingest the plastic particles and can die from choking and starvation. Scientists are also investigating the long-term impacts of the toxic pollutants which are being absorbed, transported and eaten by fish and other marine life, including the effects on human health.

"By skimming a highly concentrated flow of larger sized plastics in polluted rivers, the M.V. Recyclone would effectively mine a major source of the pollution before it reached the sea," wrote Dyson in an email exchange with Fast Company.

“To capture both large and small debris, you would probably need to employ a series of stages of separation. As better technology became available, you could upgrade the vessel to make it more efficient," he said.

Wake up and smell the fungi: mushrooms spring from waste coffee grounds

Bins made for chewing gum are also made from recycled gum