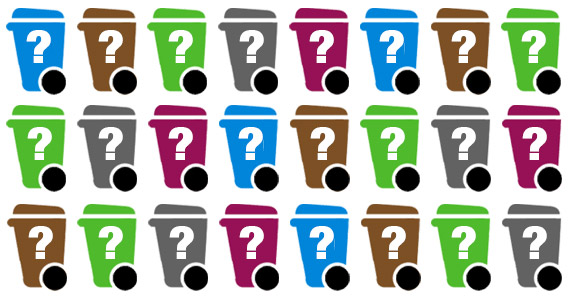 Choosing the right bin is too much for some.

People are too lazy or are in too much of a rush to separate their rubbish and put it in the right bins when they visit recycling centres, says recycling and waste disposal company BusinessWaste.co.uk

According to a nationwide waste management company, large numbers of men and women responding to a survey said that they would dump all their refuse in the 'general rubbish' bin at household recycling centres if they thought they could get away with it.

Others also admit to putting inappropriate items in charity clothes banks simply to get rid of them, BusinessWaste.co.uk said.

"Recycling's not exactly rocket science," said spokesman Mark Hall, "But we've learned that some people just can't be bothered to do it properly."

BusinessWaste.co.uk asked people in confidence what anti-social and possibly illegal acts they have carried out when using council rubbish tips, recycling bins, and charity clothes banks.

The findings were as follows:-

Put wrong colours or Pyrex in
a bottle bank - 24%

Put plastics and other wrapping in paper
recycling bins – 32%

BusinessWaste.co.uk said that most people with bad recycle habits do not realise that a single item in a skip full of recycling can cause its value to plummet, and causes extra work for others down the line.

"Some people told us that the queues for the council tip were so long they just wanted to get out and get home quicker," said Hall, "and that's why they waited for the supervising staff to turn their back and dump the lot in the same bin.

"In that sense, recycling centres are a victim of their own success, but the laziness on display is sometimes bewildering."

BusinessWaste.co.uk says that bad habits at tips also put the staff at risk, with daily health and safety decisions required as to whether they should go into a bin and haul out inappropriate items.

"It might prove unpopular, but it's the right thing to do."