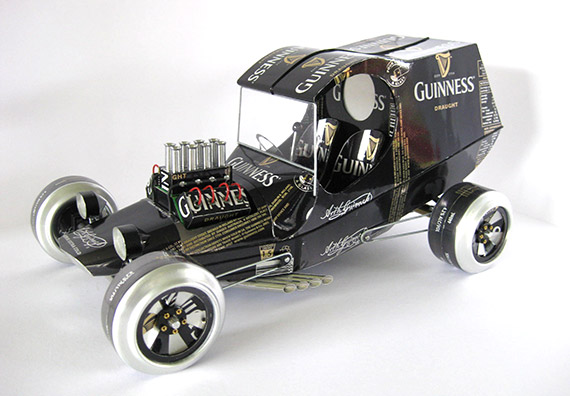 Have you woken up with a St Paddy’s Day hangover? Take a leaf out of Sandy Sanderson’s book and put it to good use.

The English-born engineer who now lives in Hamilton, New Zealand, makes models of classic cars from the old containers of drinks brands, including the ‘black stuff’.

Sandy was set to retire as a teacher and begin working full time as a luthier, an instrument maker, when he had a motorbike accident. It shattered his left wrist and required reconstructive surgery: four plates, eight screws and a bone graft from his hip. The surgery meant that he could still ride his motorbike, but he lost the sensitivity and fine control that he had previously enjoyed.

He said: “While I was off work recovering from the accident I picked up the drawing instruments and started taking a serious look at the Coruba and Cola cans that I had held back from the recycler. I have seen pictures of some very fine model aircraft made from drinks cans but they had the plain aluminium from the inside of the cans on the outside of the model. This defeats the purpose of using the drinks can as far as I am concerned. You want everyone who looks to be able to see instantly what your basic resource was. Celebrate the fact, don't hide it! 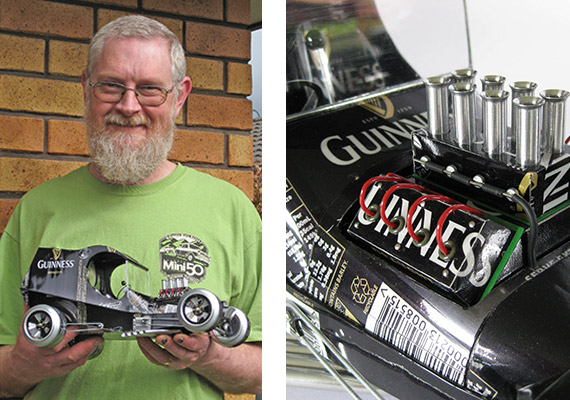 Sandy showing with the model car made from old Guinness cans, which has some amazing detail. Photo: Sandy Sanderson, www.sandyscancars.com

“Having finished the Coruba Climax, and evaluated what I had done, I realised that changes would have to be made to the next one to make the build easier and the finished model better looking. Indeed, each subsequent car has been an improvement upon the last, and until that stops happening, I'll keep going.”

He said that the plans for each car take between three and four weeks to complete and then around 80 hours to build, depending on their level of detail. What may appear to be just one can, could actually be five or six, and some are formed of 30 drinks cans.

Find out more at www.sandyscancars.com