In a Digital Flutter 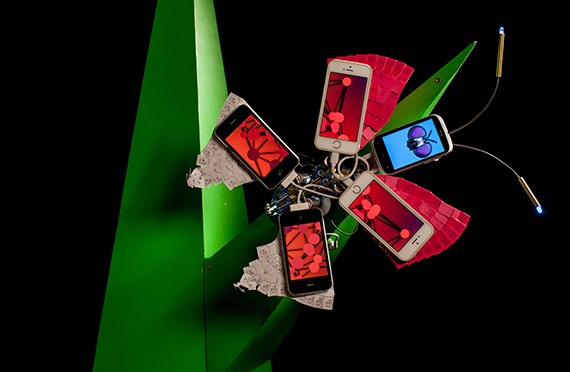 A group of designers and coders have unveiled a set of four digital butterflies made entirely out of discarded mobile phone components in London.

Commissioned by O2 Recycle to highlight new possibilities from old technology, the robotic creations were revealed ahead of World Environment Day on June 5. The digital butterflies demonstrate the potential lying in unloved technology, where old gadgets are up-cycled rather than being tossed into the rubbish.

The striking mechanical creatures took more than seven months to build and have advanced coding algorithms incorporated into them; so that each butterfly has a unique response to every person it interacts with. They will go on display in the O2 store at The O2 later in the summer.

Each butterfly has an individual phone number which, when called, activates the butterfly and instructs it to spread its digital wings. Made out of handset screens, the wings feature a bespoke pattern which constantly evolves, behaving differently with each interaction. 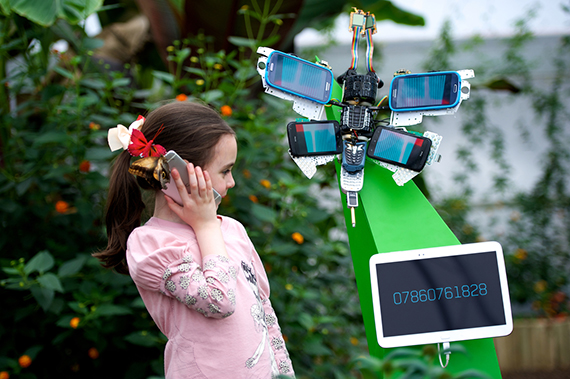 You can make the butterflies move and change colour by calling each one's individual phone number. Picture: O2 Recycling

Individually designed to represent different species, the four butterflies all boast their own look and set of features, such as extendable antennae, a head which moves on more than one axis of freedom and laser eyes.

Bill Eyres, head of sustainability at O2 said: “We can see this project creating a type of ‘butterfly effect’. As people experience this amazing recycled technology, we hope they will be inspired to regularly recycle their old devices. Many people don’t realise that their old technology can have a second life.

“There’s an environmental need to dig out old gadgets so they can be used again, rather than lying unused and unloved in a drawer. O2 Recycle offers a simple, sustainable way to recycle unused gadgets and receive a cash payment in return. We all have a role to play in making sure that old technology lives on even when we’ve finished with it.”

Chris Cairns, creative director at is this good?, the collective who designed the butterflies for O2, said: “We wanted to give the ‘old and forgotten’ a new lease of life and showcase the fact that even the discarded can emerge as something new and beautiful, which is what up-cycling and O2 Recycle is all about.

“We hoped that, by creating ‘Social Butterflies’, we would raise a smile and remind people that we can create moments of recognition and happiness out of products we have previously loved and now overlook. Each of these butterflies have their own little personality quirks so I’m looking forward to the members of the public starting up a conversation with them.”