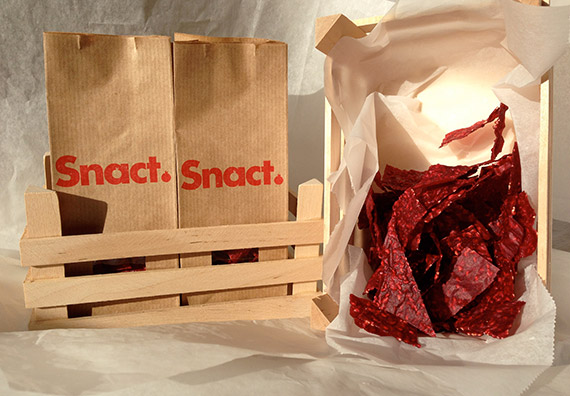 South London-based Snact has gone from strength-to-strength since forming in summer 2013. It makes use of some of the millions of tons of perfectly good fruit which gets thrown away in the UK before reaching the shops.

Snact turns that surplus into healthy, dried fruit snacks which are 100% fruit, with no additives or preservatives. It was co-founded by Ilana Taub and Michael Minch-Dixon, who met at school and both have a master’s in Business and Sustainability.

The pair were moved to take action on food waste after discovering that a third of the food we grow globally gets thrown away, and that there are five million people in the UK alone who are in food poverty.

Snact was a finalist in the Virgin Money Be The Start competition for sustainable businesses and has been producing and selling the snacks since November 2013.

Ilana told Recycleopedia.com: "Both of us are passionate about food sustainability and finding solutions to our current broken food system. We decided to do something about food waste because it's something we could start doing pretty much straight away, and something that we could start on a relatively small scale with low investment and grow from there

“We started Snact because we wanted to contribute to creating a better food system. Millions of tons of food get thrown away every year, and millions of people are affected by food poverty. It doesn't need to be that way."

The snacks change depending on the types of fruit that are abundant with farmers and in the markets, and are made from blending and baking fresh fruit at a low temperature for a few hours. Flavours cooked up so far include blackberry and pear and blueberry and apple.

The company also works on the premise that a better food system is about the people involved in it, so plans to employ people who have been affected by food poverty to make and sell the ‘snacts’.

The products can now be found in two shops in Brixton, south London, and Snact is a regular at the Lower Marsh Saturday market in Waterloo.

Snact currently source their fruit from London wholesale markets including New Spitalfields and New Covent Garden Market, but are now looking at other suppliers and plan to source surplus directly from farmers by summer 2014.