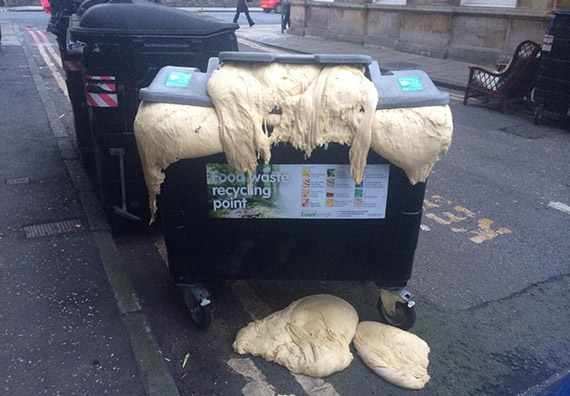 A scene from 'The Blob' or expanding pizza dough? Photo: Ailsa Burn-Mudoch, Twitter

Edinburgh resident Ailsa Burn-Murdoch tweeted a picture of pizza dough spilling out of a bin outside a restaurant in Crown Street in the Scottish city.

She tweeted the photo on Tuesday morning, with the caption: “PapaJohnsUK thanks for livening up my walk to work #EdinburghLeithWalk #doughmonster” after spotting the unusual sight on her way to work.

The company said it was “investigating this further directly with the store”.

Later that day, after the image spread around the world, making headlines at the same time, Ms Burn-Murdoch tweeted: “Came out of a meeting to find I’ve created a monster. Also I now want pizza. Odd day.”