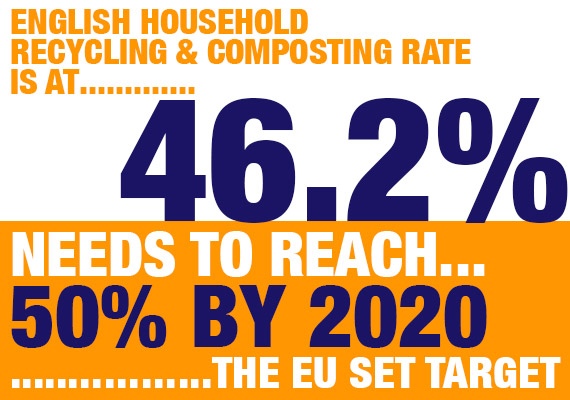 English councils notched up a household recycling and composting rate of 46.2 per cent in the first quarter of 2013/14, an increase of just 0.4 per cent compared to the previous 12 months.

Data shows that the amount of household waste remained relatively unchanged at 22.7 million tonnes in the 12 months to June 2013, while previously it had fallen steadily by 10 per cent throughout 2008, 2009 and 2010.

The figures, published recently by Defra, cover the period from April to June 2013. The very slight increase means there remains a significant challenge to reach the 50 per cent by 2020 EU recycling target.

The data does suggest that household dry recycling was 3 per cent higher in April to June 2013 than 12 months earlier, while household waste for composting saw an increase of 1.7 per cent in the same period.

But, the amount of local authority-managed waste going to landfill or incineration was also 1.3% higher in this quarter compared to the same period in 2012. Landfill accounted for 32% of all local authority waste disposal.

A Defra spokeswoman told letsrecycle.com: “The UK has made tremendous progress over the last 10 years and we remain committed to meeting our target. We will continue to work with local authorities and industry to promote good practice and look at how recycling can be made easier."