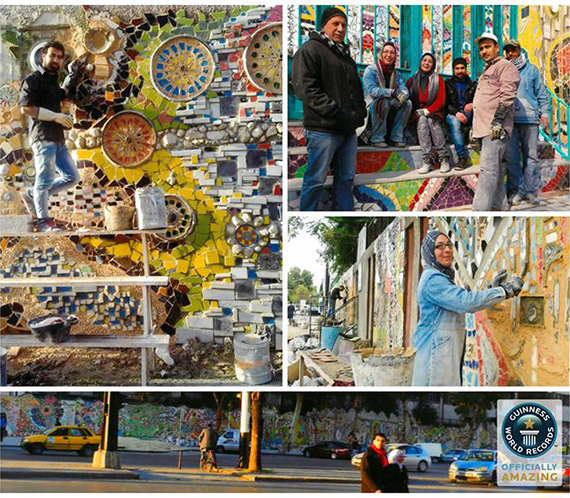 The swirling, brightly-coloured mural measures 720m² (7,749.98 ft²) and was completed in January. It took around six months to create.

Makhoul told Agence France-Presse that he dreamt up the project to give ordinary people in the Syrian capital a chance to experience art and relieve some of the pressures of daily life as war in the country enters its third year.

"In the difficult conditions that the country is going through, we wanted to give a smile to the people, joy to the children, and show people that the Syrian people love life, love beauty, love creativity," he told the agency.

The largest sculpture made from recycled materials measured 26.8 m (87 ft 11 in) in length, 18.4 m (60 ft 4 in) in width and 8.66 m (28 ft 6 in) in height, and was created at an event organised by the Kuwait Association of Engineers in Kuwait, in November 2011. The sculpture represented a hard hat and engineering tools.

The largest orchestra playing on recycled materials consisted of 617 members who formed an orchestra at the Przystanek Woodstock festival in Kostrzyn, Poland on 1 August 2010.

The orchestra played a composition called All for Planet, which was composed especially for the event.