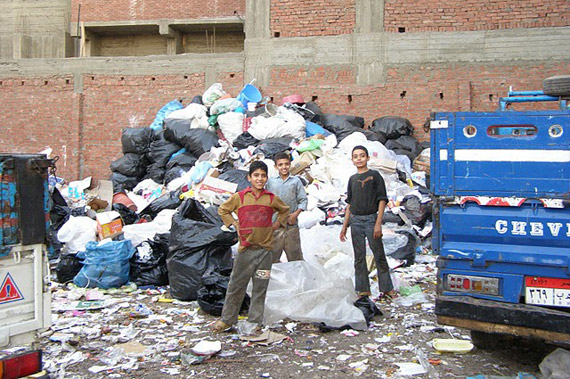 Former ragpicking community is given official status in Egypt as policymakers go back to basics in order to get rid of the city’s rubbish.

A community of Christian former ragpickers has been placed at the centre of Cairo’s new waste strategy – collecting some 9,000 tonnes of rubbish from the city’s 17 million inhabitants each day.

The word ‘Zabaleen’ is said to mean ‘garbage people’ in Egyptian Arabic and refers to people who have served as Cairo’s informal waste collectors for around 70 years.

But now, their role looks likely to be made official as the government signals plans to take over disposal responsibilities in an area of the city, writes Marion Guénard in The Guardian. The Zabaleen, under the management of the ministry of the environment and the Zabaleen union, have now been registered to carry out the role, using a labour force of 1,000.

Politics and religious disagreement previously meant that multinational corporations had been shipped in to dispose of the city’s waste but this had reportedly not worked well. With the help of NGO the Zabaleen have facilities for recycling plastic, paper and metal and are also said to feed organic waste to the pigs they keep in their backyards. Animal excrement is also composted.

The Guardian reports Leila Iskandar, minister of the environment, as saying: “It's an aberration. Over the years the Zabaleen have created an efficient ecosystem that is both viable and profitable, with a recycling capacity of almost 100%. It provides work for women and young people who are the first to suffer from Egypt's unemployment. We need to use this local organisation.”

Ezzat Naem, a member of the Zabaleen community who has reportedly worked in waste disposal for his entire life, is quoted as saying: “"We have always been treated as a backward people incapable of managing the refuse of such a large town. And yet we are the ones who invented an eco-city model."

Lions and tigers reap the benefits of recycled Christmas trees